Scott Carpenter was one of the seven original Mercury astronauts. He flew the second earth orbital mission for the United States in the capsule Aurora 7 on May 24, 1962. 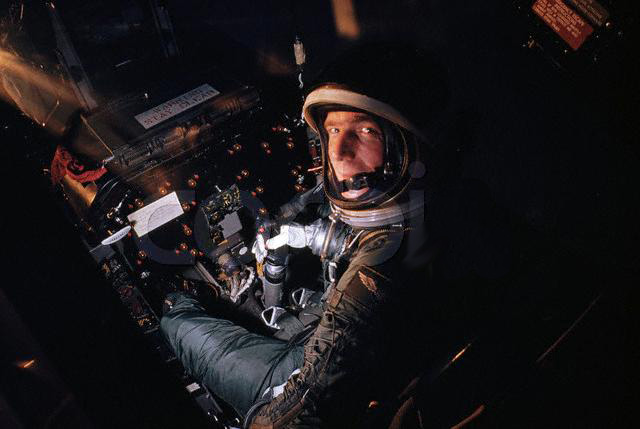 Carpenter was also a naval pilot, aeronautical engineer, pioneer ocean explorer, and author. He passed away on October 10, 2013.

John Glenn flew the first United States orbital mission on February 20, 1962 aboard the Friendship 7 capsule. Carpenter served as capsule communicator during this flight. His radio transmission to his colleague during liftoff, “God speed, John Glenn,” has assumed iconic status.

During Glenn’s initial three orbits, he observed and reported countless luminescent particles in the atmosphere, particularly as his capsule moved from night into day. He said at the time that the particles were not coming from the capsule and were already up there.

You can hear Glenn’s actual transmissions describing the particles here.

During Carpenter’s Aurora 7 orbital flight, he tested a hypothesis about the particles. He tapped on the side of the capsule and noted that a shower of particles seemed to loosen and float away from the craft. Scientists assumed the particles were crystals of frozen liquid loosened by the tapping. They deduced that John Glenn had seen the same thing during his earlier flight.

Although Glenn had specifically said the particles were not coming from the craft, that they were already up there, and that they covered the sky, NASA scientists embraced the explanation that he had seen ice crystals coming from the capsule.

Carpenter on several occasions described an alternative hypothesis – that there were living creatures in Earth’s atmosphere, and that Glenn had passed through a swarm of such organisms. On one occasion he described them as “critters, living critters.”

During an interview for a documentary on the 50th anniversary of Glenn’s Friendship 7 flight, Carpenter went into detail about how some of the best scientific minds at the time considered that there were living creatures in the atmosphere. He describes, seemingly wistfully, how after his experience, in the eyes of most scientists, the living creatures became inanimate ice crystals.

Even if Carpenter produced a shower of particles by tapping the side of his capsule, were they necessarily just crystals of frozen liquid? Could they have been organisms clinging to the side of his craft after he passed through a swarm, dislodged by the tapping?

We tried to contact Commander Carpenter several times as we began studying the possibilities for life in the sky. His assistants were never able to arrange an interview. His amazing career ended with his passing in 2013, at the age of 88.

If Carpenter was entirely convinced that he had neatly solved the mystery of the atmospheric particles, it seems unlikely he would repeatedly describe the alternative hypothesis of “living critters.” Perhaps he instinctively knew there was more to explore.

We can honor Scott Carpenter’s memory and his pioneering achievements by studying the possibilities for atmospheric life that he and his colleagues in space exploration have revealed.

The actual audio from Glenn’s Friendship 7 flight and dozens of other actual NASA clips of lifelike UFOs can be found as extras on the DVD or Blu-ray versions of Not Alone.