SIFTING THROUGH THE NOISE

The Nature of UFO Evidence

There is a huge variety of UFO evidence that cannot be fully explained by the most common hypotheses.

We are limited by our perspective dwelling on Earth’s surface. We use craft to maneuver through the skies. So some assume that objects in the sky must also be craft, even though evidence may not support this hypothesis.

Some are drawn to the subject of UFOs by the promise of finding something greater than ourselves. So they may assume that the flying craft are piloted by humanoid aliens from other planets, without supporting evidence.

Some researchers, authors, and producers compete for funds and attention, with new dramatic claims of alien contact and intergalactic conspiracies.

Witnesses naturally want to understand their sightings. They may filter their recollections through preconceptions, hopes, and fears.

So how do we find, gather, and evaluate quality UFO evidence? How do we determine what is worthwhile?

Tens of thousands of witnesses have shared tales of their encounters.

Witness reports may or may not accurately reflect what actually happened. Panic, prejudice, or even physical or psychological effects from UFO encounters may color memories.

With multiple witnesses, the chance of accuracy increases.

To be worthy, witness reports should be clear and factual descriptions of events, free of interpretation or judgment.

However, we may still be able to glean kernels of valuable data even from what may seem bizarre or muddled cases.

Thousands of UFO photos and videos show a wide variety of objects.

Finding the original or best versions can be important. For example, note the difference in detail between these two versions of a UFO photographed over Zimbabwe (then Rhodesia) in 1952. 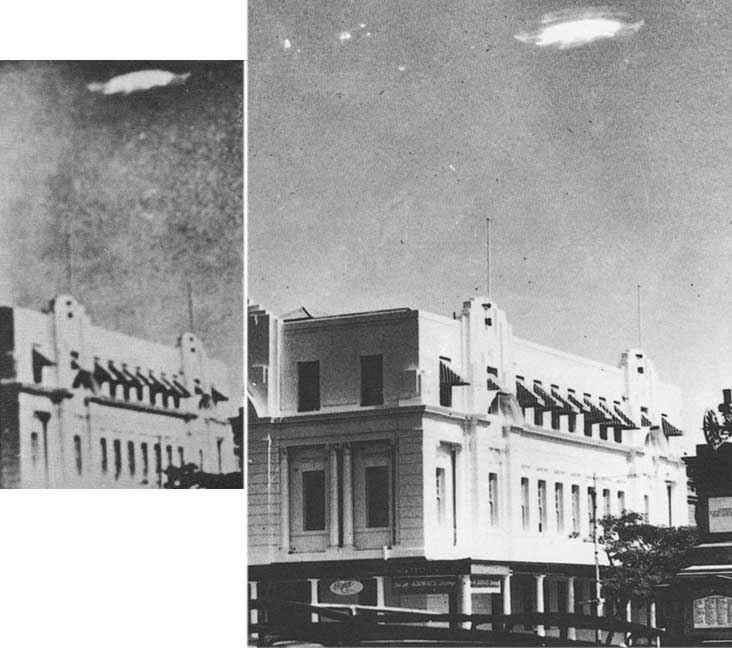 One more clearly reveals a translucent structure around the lighted interior.

As more and more people worldwide carry phones with cameras, we have seen an increasing number of UFO videos. This provides an historic opportunity to gather evidence.

However, limitations of consumer electronics combined with challenges of shooting through Earth’s dense fluid atmosphere often produce evidence of limited value. Most videos show blurry objects high in the sky, or fuzzy lights at night.

The body of photographic and video evidence is also tainted by deliberate hoaxes and misinterpretation.

Quality photo and video evidence is best obtained directly from a reliable witness. It shows foreground objects for perspective. It is clear enough to show some form or structure. Video evidence should be lengthy enough to give an idea of speed and movement.

Many different materials have fallen from the sky, including “angel hair”, wisps or threads like tentacles falling from UFOs.

Witnesses have seen objects descend to the ground to leave blobs that sometimes glow or pulse. Such physical evidence often sublimates or evaporates rapidly.

The best physical evidence should be witnessed actually coming from an atmospheric object, gathered promptly, and carefully sealed into containers for laboratory analysis.

Objects in the sky sometimes leave tracks and traces as they move near earth’s surface.

This type of evidence is valuable when actually observed being caused by aerial objects. For example, in 1966 multiple Australian witnesses saw lighted objects fly into the sky from a grassy area where they found these “saucer nests”.

Tracks and traces can help us understand the size, weight, and substance of these objects and perhaps even their methods of propulsion.

Like no time before in human history, we have channels of communication that allow us to instantly share evidence worldwide. While the level of noise has risen to fill these channels, great opportunities exist.

We can connect directly with individual witnesses. We can talk with them and record them firsthand, while their experiences are fresh.

We can obtain and share digital photos and videos worldwide.

Many dedicated researchers and organizations have worked hard to gather data without judgment. Some have valuable libraries and databases of evidence that they willingly share. You will find links to many of those groups on the side of each page.

Many writers and filmmakers have collected and presented facts about UFOs, providing detailed description without undue interpretation or judgment.

When we sift through the cacophony surrounding the topic of UFOs and focus on quality evidence, a signal starts to become clear.

After reviewing thousands of reports, books, photographs, and videos, we propose that much of the best available evidence supports the hypothesis that many UFOs are living creatures.

This perspective offers a sensible framework in which to interpret the spectrum of UFO evidence.

Read our article The Sky Is Alive. Learn about the amazing animals that move through our planet’s oceans.

Now, consider the vast ocean of air above us.

If you know of valuable evidence or have an idea for gathering more, please contact us. If you have your own stories, photographs, or videos, please share them here.