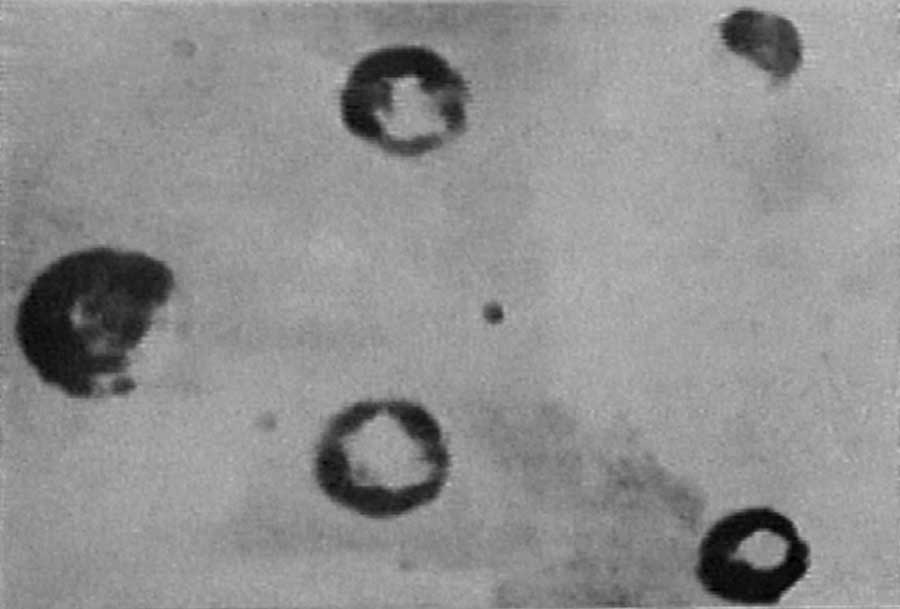 This 1950 photo may show several objects from a huge flock that moved across the skies over Farmington, New Mexico…

In March 1950, a flock of objects high in the sky amazed and shocked residents of Farmington, New Mexico. Multiple witnesses watched the objects cavort, seeming to interact with each other.

They described the objects as pulsing and swimming.

Some said the objects moved in formation, at speeds of up to 1,000 miles per hour, able to instantly change direction at right angles.

The thousands of objects continued to pass overhead for days.

Supposedly, Air Force investigators gathered from Farmington residents every known picture of the objects. However, one was out of town and was able to keep this picture:

Here it is with Photoshop’s Emboss filter applied: 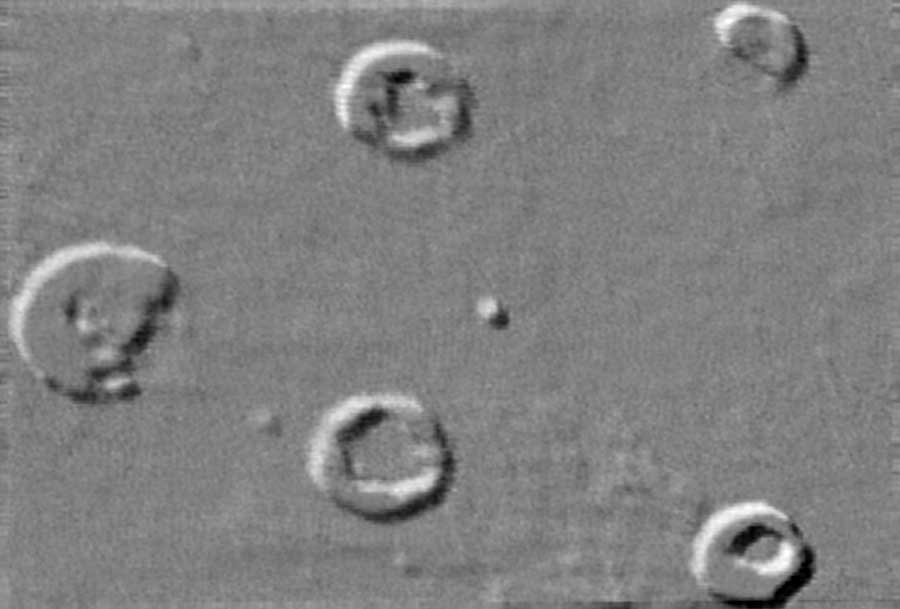 Here it is with a Glowing Edges filter applied: 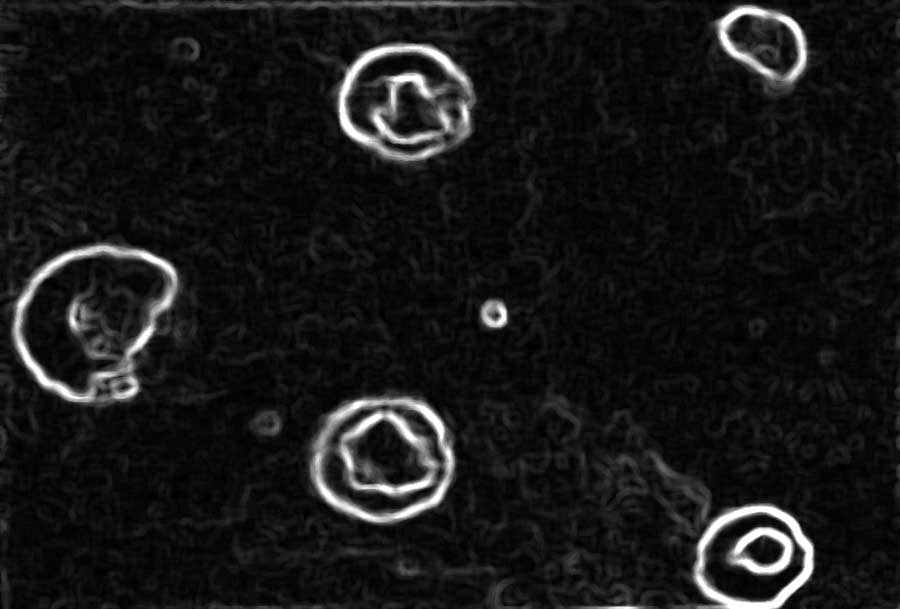 Note the differing shapes, like jellyfish in various stages of propulsion.

Does this show aerial invertebrates, crossing the sky in a flock?

This is one still picture of one section of the sky. You can see at least nine objects. Imagine such activity all over the sky for days, a huge population.

These population explosions are seen in coverage of UFO fleets, armadas, swarms, and flotillas. With worldwide access to powerful cameras, footage of “saucer” flocks high in the sky grows in quantity and quality.

With proper preparation, great discoveries could lie ahead.

Here is the text of a newspaper article from the time:

For the third consecutive day flying saucers have been reported over Farmington. And on each of the three days their arrival here was reported between 11 and noon.

Persons along Main Street once again could be seen looking skyward and pointing.

Fully half of this town’s population still is certain today that it saw space ships or some strange aircraft – hundreds of them zooming through the skies yesterday.

Estimates of the number ranged from “several to more that 500.” Whatever they were, they caused a major sensation in this community, which lies only 110 air miles northwest of the huge Los Alamos Atomic installation.

Farmington citizens stood in the streets yesterday watching the first reported mass “flying saucer” flight ever sighted. Traffic was slowed to avoid hitting sky gazers. The office of the Farmington Daily Times was deluged with calls from persons who saw the objects.

Scores described the objects as silvery discs. A number agreed they saw one that was red in color — bigger and faster, and apparently the leader.

Clayton J. Boddy, 32, business manager of Farmington Times and a former Army Engineers captain in Italy, was one of those who saw the startling objects.

Boddy was on roadway when all of a sudden he noticed a few moving objects high in the sky.

“Moments later there appeared what seemed to be about 500 of them,” Boddy continued. He could not estimate their size or speed, but said they appeared to be about 15,000 feet high.

Boddy’s account was confirmed by Joseph C. and Francis C. Kelloff, retail grocers from Antonito, Colo., who were in Farmington to inspect the site of a proposed new store, and by Bob Foutz and John Burrell of Farmington. The Kelloffs said the objects appeared to be flying in formation.

One of the most impressive accounts came from Harold F. Thatcher, head of the Farmington unit of the Soil Conservation service. Thatcher made a triangulation on one of a number of flying craft, He said if it had been a B-29 it would have been 2,000 feet high and traveling more than 1000 miles per hour.

“I’m not a professional engineer,” Thatcher said, “but I have engineers working under me and I know how to work out rough triangulation on an object.”

Thatcher emphatically denied an earlier report that the objects could have been small pieces of cotton fuzz floating in the atmosphere.

“It was not cotton,” he said, “I saw several pieces of cotton fuzz floating around in the air at the time, but I was not sighting on any cotton.”

The “cotton” report was started by State Patrolman Andy Andrews, who quoted several Farmington Residents as asserting it was cotton they saw. The residents denied Andrew’s report.

The first reports of flying saucers were noted a few minutes before 11 a.m. yesterday. For a full hour thereafter people deluged the Times with reports of the objects.

A second large scale sighting occurred at 3 p.m. At that time, Mrs. Wilson Jones, 27, and Mr. Roy Hicks, 33, housewives reported seeing objects to the north of Farmington, flying in perfect formation. Others reported the same sight.

Johnny Eaton, 29, a real estate and insurance salesman, and Edward Brooks, 24, an employee of the Perry Smoak garage, were the first to report the red-colored sky object.

Brooks, a B-29 tail gunner during the war, said he was positive the objects sighted were not airplanes. “The very maneuvering of the things couldn’t be that of modern aircraft,” he said.

John Bloomfield, another employee of Smoak’s garage, said the objects he saw traveled at a speed that appeared to him to be about 10 times faster than that of jet planes. In addition, he said the objects frequently made right-angle turns.

“They appeared to be coming at each other head-on,” he related. “At the last second, one would veer at right angles upward, the other at right angles downward. One saucer would pass another and immediately the one to the rear would zoom into the lead.”

Marlow Webb, another garage employee, said the objects to the naked eye appeared to be about eight inches in diameter as seen from the ground. He described them as about the size of a dinner plate.”

“They flew sideways, on edge and at every conceivable angle,” he said. “This is what made it easy to determine that they were saucer-shaped.”

None of the scores of reports told of any vapor trail or engine noise. Nor did anyone report any windows or other markings on the craft.

In general Farmington accepted the phenomenon calmly, although it was reported some women employees of a laundry became somewhat panicky.

Opinion was somewhat divided among those who saw the objects as to whether they were from another planet or were some new craft of our own nation’s devising. Some expressed the opinion the entire incident was a fulfillment of a Bible prophecy.

From sifting all the reports, the Farmington Times compiled this “timetable” of sightings:

1. 10:15 am, five to nine “saucers” zoomed over the town’s business area for 10 minutes before moving out of sight to the northeast.

7. 3:00 pm, fleet of “hundreds” seen flying in formation to the southwest from the northeast.

Here are some other articles about the Armada that Crossed Farmington: 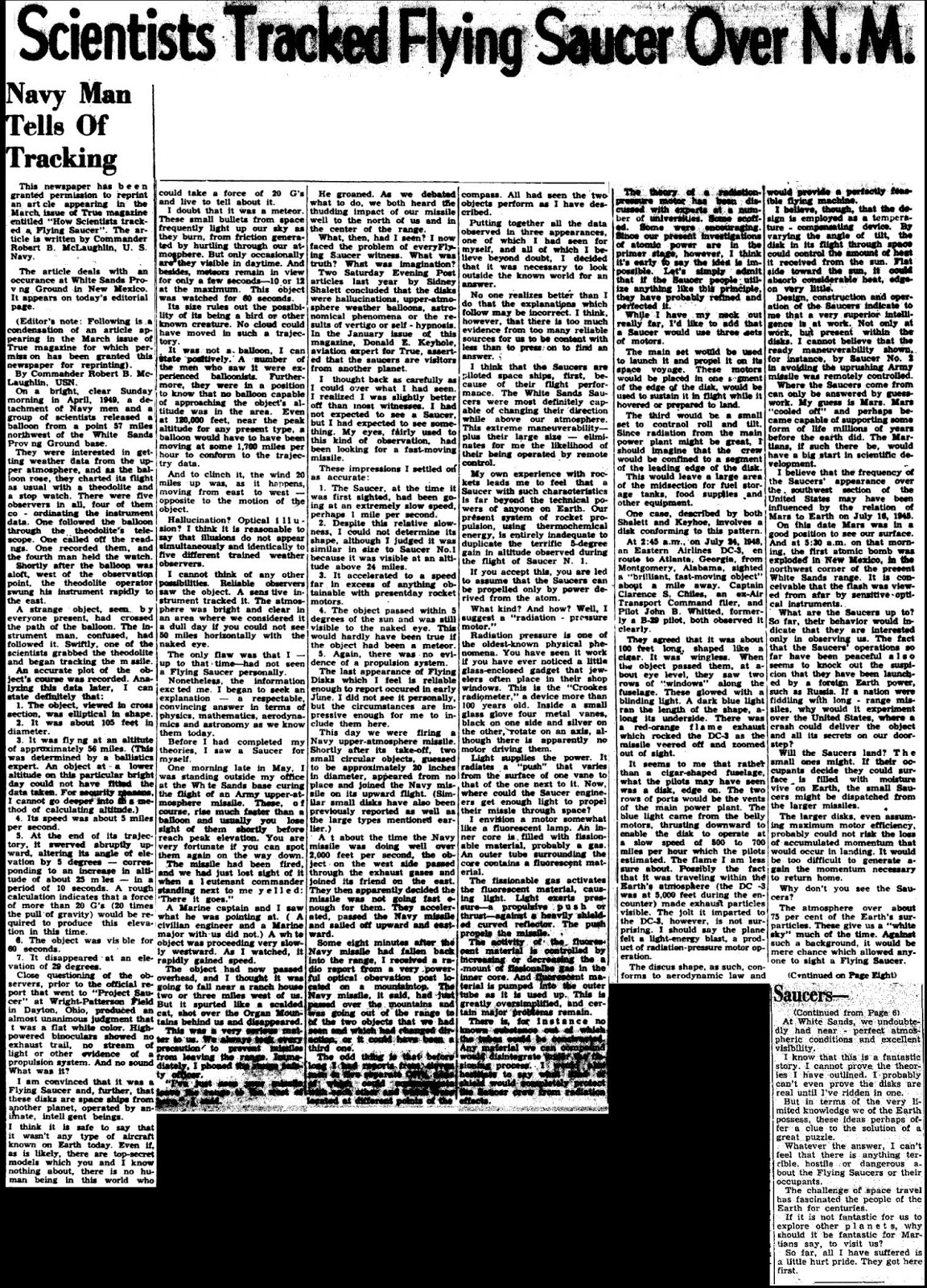 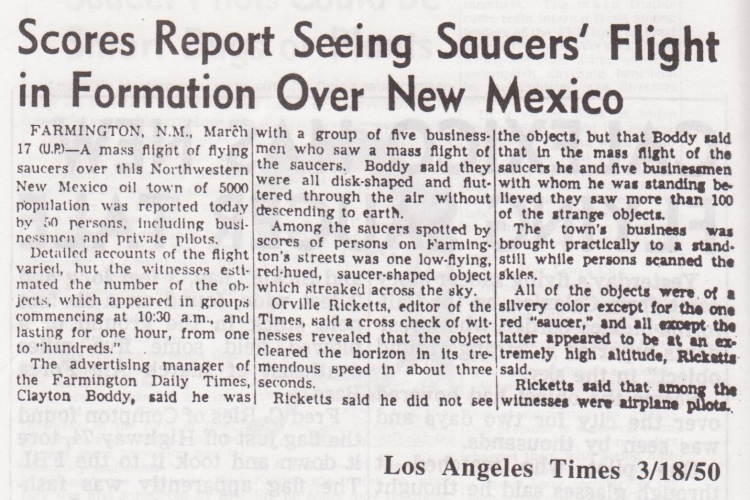 Thanks to researchers and transcribers: